Mobile Vs. Desktop: Mobile Won, But You Might Still Be Losing 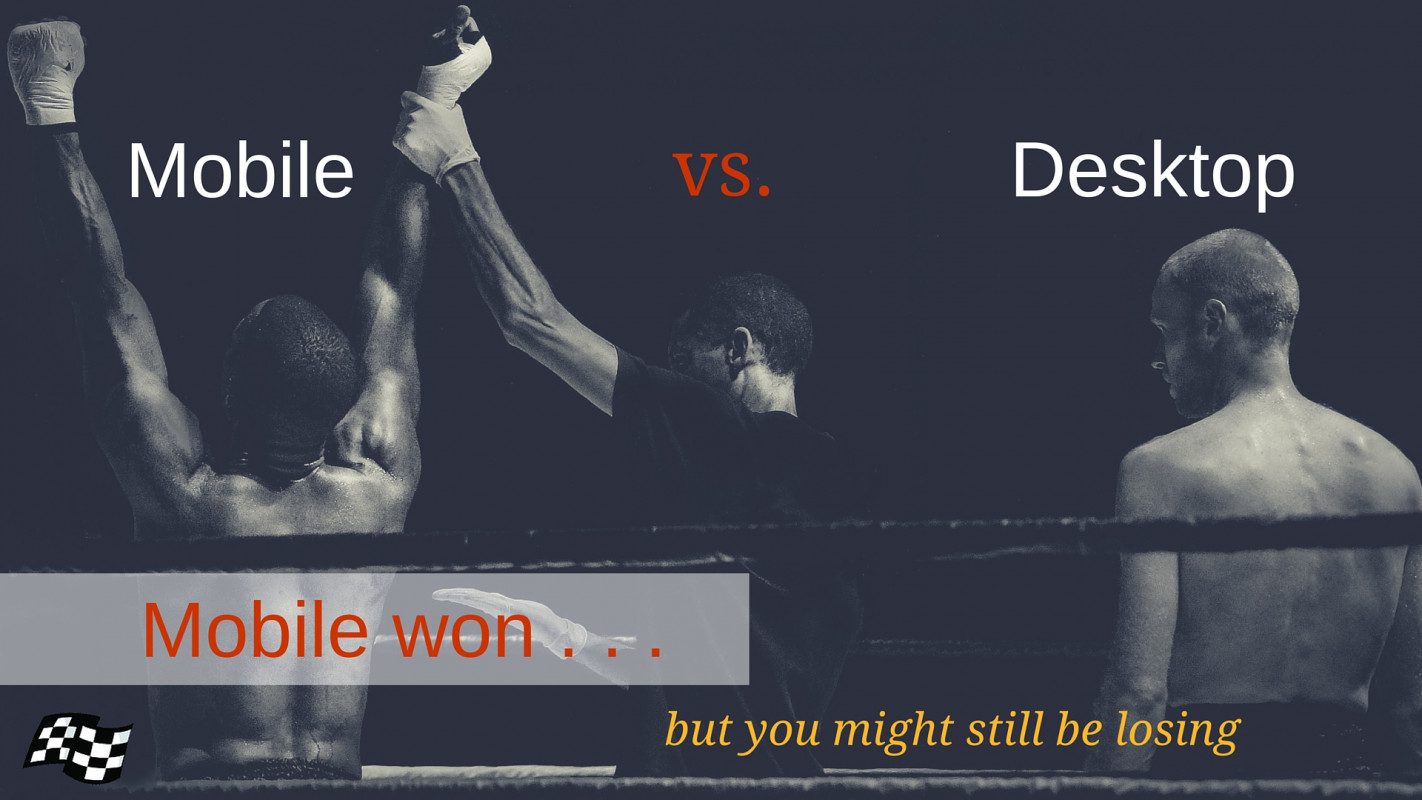 Columnist Stoney deGeyter argues that in order to succeed with digital marketing, we may need to shift our mindset from "mobile-friendly" to "mobile first."

I think we are well beyond the point where we are making websites “mobile-friendly” or “mobile-ready.” Doing so still places the focus on the desktop, with mobile design and optimization just being an add-on. If that’s still they way you’re looking at it, you have already fallen behind.

For the past couple of years, developers and marketers have been talking about building websites to be mobile-ready. You hear people discuss things such as mobile websites versus responsive design and which is the right way to go. Those conversations all had their merit in the past, but they really have no business taking place today.

Mobile design and optimization can no longer be considered secondary, or an add-on, or something that you should do “too.” In fact, today, it is desktops that should be considered the secondary device. And all our Web development and marketing efforts should reflect that.

It’s still common for Web designers to develop wireframes and comps for your website that do not include the mobile site. After all, just throw in a WordPress plugin and ta-da! it’s mobile ready. That’s kind of like competing for second place.

Mobile isn’t the future — it’s the present. I’m not saying that you don’t need a stellar desktop site. You do. But as mobile becomes more and more natural for searchers and information gatherers, you must have a mobile site that meets their needs. Failure to do so will be your death knell.

Unfortunately, I still find myself wanting to see the desktop version of sites on my mobile phone due to the mobile versions limitations. This has to change. Your visitors need to be able to do everything on the mobile site that they can on the desktop. According to a recent study by ShareThis, Web users are almost twice as likely to share content from their mobile devices as they are from their desktops.

If your social sharing buttons work when displayed on your desktop but not on mobile, you’re missing out on about two-thirds of your online branding potential. That’s a lot of people who won’t be seeing your content, simply because your content isn’t shareable from a mobile device.

Many sites use social sharing plugins for desktop that don’t work well on the mobile site. They either get in the way or are too cumbersome to use properly. I’m all for plugins, but make sure that you have considered all the ways that plugin will be used by your visitors.

Even though Google has admitted that their new mobile algorithm still looks at the content displayed on the desktop for mobile ranking purposes, that doesn’t mean that we don’t need to care about mobile content. According to Google, you can display completely different content on your mobile device from the content on your desktop device, but why would you?

The real value in the mobile content is in how it is displayed. Unlike on desktops, with mobile you can chunk and hide content under accordion-type menus. This serves to streamline the viewing area of each page. This content is then displayed on demand to the visitor. You can do the same on desktops, but not without devaluing the unseen content to a certain degree.

As long as mobile algorithms use desktop content for ranking purposes, keyword optimization for mobile will be no different from optimization for desktop. And still, I don’t see a scenario where we’d want to optimize text differently anyway.

According to an eMarketer report, the one place where desktop continues to outshine mobile is in the area of ROI on ads.

Return on Investment (ROI) has not reached a similar tipping point. ROI on mobile search is improving, but it will continue to trail desktop search ROI [in 2015] — and further into the future, until mobile performance measurement, particularly in relation to the impact on sales in physical stores, gets more precise.

This tells us that we cannot forsake desktop design, optimization and other forms of marketing. Desktop is and always will be important until the day comes when there is no such thing as a desktop computer. But until then, we still have to strive for building, optimizing and marketing our desktop sites as best as possible.

But mobile is taking has taken over. If you’re not out ahead of it already, it’s not the end of the world. But if you don’t start putting mobile first, it won’t be long until you start losing the possibility of achieving or maintaining a leadership position on the Web.

Mobile Vs. Desktop: Mobile Won, But You Might Still Be Losing
Columnist Stoney deGeyter argues that in order to succeed with digital marketing, we may need to shift our mindset from "mobile-friendly" to "mobile first." I think we are well beyond the...
Marketing
Autor: Stoney deGeyter

SEO in 2017: Mobile optimization as a competitive advantage
Even many of the titans of the internet could do with a bit of optimization of their mobile sites. Contributor Marcus Miller offers a comprehensive view of how to ensure you're making the most of the...
Marketing
Autor: Marcus Miller